Duncanville ISD’s head varsity football coach has done a tremendous job of rebuilding the Duncanville football program in his four years with the district.

Coach Reginald Samples quickly established a winning culture with impressive record in 2017. In 2018, the Duncanville Panthers, for the first time in 20 years, went to the State Championship finals game.
The 2018 season was also the first ever for the Panthers to achieve a 15 game winning season.

Coach David Peavy joined the Duncanville ISD family in April 2018, coming from Dekaney High School in Spring ISD (Houston).  He brings more than 22 years of successful coaching experience at the high school and collegiate levels. Coach Peavy has been named Coach of the Year three times and was twice named to the Texas Association of Basketball Coaches All-State Committee.

Coach Peavy believes in developing leaders and promoting discipline on and off the court. He is committed to building a championship team of character, class and one that gives total effort. He earned his Bachelor of Science in Kinesiology and his Master of Education in Teaching from the University of the Incarnate Word in San Antonio.

Coach Fahey is a 2002 graduate of Northwood University with a degree in Business Management. Fahey’s father Bill was in professional baseball for 22 years, including 11 years as a major league catcher for the Rangers, Padres, and Tigers, and six years as a coach for the San Francisco Giants. His brother Brandon played eight seasons of professional baseball, with three seasons as a major league infielder/outfielder for the Baltimore Orioles. His mother Carla has been an active volunteer in the school district and PTA for over 30 years. Fahey married his wife Janel in 2008 and they have two daughters, Reagan and Carsen.

Coach Brett Duff graduated from Duncanville High School in 1997. He coached at Kennemer Middle School from 2005-2007 before coming to coach at Duncanville HS in 2008. Duff became the Assistant Softball coach at DHS in 2010 and Head Coach in 2014. Coach Duff led the Lady Panther Softball team to their first playoff victory in 2016.

Duff is married and has two daughters, Ashton and Dani. 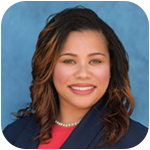 Evangerline Trice has coached for 12 years with experiences as an Assistant Boys’ Basketball coach, Track & Field Throwing Coach, and within her true passion as a Head Volleyball Coach. She’s spent the past two years as head coach of the volleyball program at Lincoln High School, where she led the team to two playoff appearances. Coach Trice has obtained her bachelor’s degree in English Language Literature from the University of Michigan in 2009 and currently pursuing her Master of Education in Educational Administration at Lamar University. The 2020-2021 Season will be her sixth season as a head coach. She specializes in turning programs around through relationships, skill-building, and accountability.  “I believe in fostering a program of ladies who respect themselves and their teammates; who have a desire to constantly improve their skill levels while upholding high scholarly averages, and that have a yearning to lead both on and off the court. I’m committed to creating a transformational culture that thrives in the presence and the absence of my coaching staff.”

Coach Stephanie Bernier joined the Duncanville High School coaching staff in 2015. Her previous coaching experience was at Cedar Hill HS, where she took relays and individuals to Regional finals for two years. She has been coaching USA swimming club teams since 2011. Coach Bernier grew up in Cedar Hill and swam for the club team based at the Duncanville Natatorium since 2000. She attended the University of North Texas on a swimming scholarship, was captain of her team, and achieved NCAA cut on a relay while earning a Bachelor of Science degree in Biology.

Coach Jordan Jackson is in his second year at Duncanville High School, and was the assistantcoach last year.  He graduated from Dallas Baptist University, where he competed on the collegiate level. As well as being a scholar athlete, Jackson was awarded the honor of Men’s NCAA Player of the week and All-American honors. Both of his parents are coaches, and his Dad currently coaches tennis and cross-country at Stockdale High School. He credits their influence on helping him become who he is today. He is also very thankful for the opportunity that Coach Trent Sellers gave to him to be able to come to Duncanville, along with his mentorship and friendship over these two years.

Coach Jackson is very thankful to be a part of the Duncanville High School family and wants to do his best to continue the successful tennis program, but more importantly to try and impact young boys and girls to be their very best in the classroom, court, and in their life pursuits.

Coach Nuno Passos is beginning his 18th year in teaching and coaching and his eighth year at Duncanville. He is only the third boys soccer coach in Duncanville HS history.

Coach Passos is married with two children and resides in Mansfield, Texas.

Coach Benjamin Thrasher is in his sixth year at Duncanville High School. He has been an assistant coach for boys soccer for the past 4 years. This is his first year as a head coach for girls.

Coach Thrasher is married with an 8 year old son.

Coach Leon Paul is a product of Fort Worth, TX. He is a graduate of Arlington High School where he lettered in both football and track. He received a football scholarship to play cornerback at Oklahoma Panhandle State University. While attending OPSU he earned two All-Conference honors and received a bachelor’s degree in Kinesiology.

Coach Paul has coached at three other high schools prior to coming to Duncanville to be the head boys track and field coach. He started his career at South Grand Prairie and then has been to Crowley and Kennedale HS.

“Getting the opportunity to come to Duncanville and be around future hall of fame coaches is an atmosphere I wanted to be around,” Paul says. “The level of competition in our district makes our kids better and makes our coaches better, and I always strive to be the best at whatever I do.”

Coach Leon Paul is married to Shenay Paul and is the father of three beautiful daughters - Kailyn, Robyn and Kenidee.

Coach Yvette Green grew up in Fort Worth and graduated from Arlington Heights High School. While at Arlington Heights she competed in volleyball, basketball, and track and field. She received a scholarship to Texas State University for Track and Field, earning a Bachelor of Arts degree in Psychology.

Coach Green became part of the Duncanville family in 2012 as an assistant Track Coach. In 2014 she became the Girls Head Track and Field Coach.